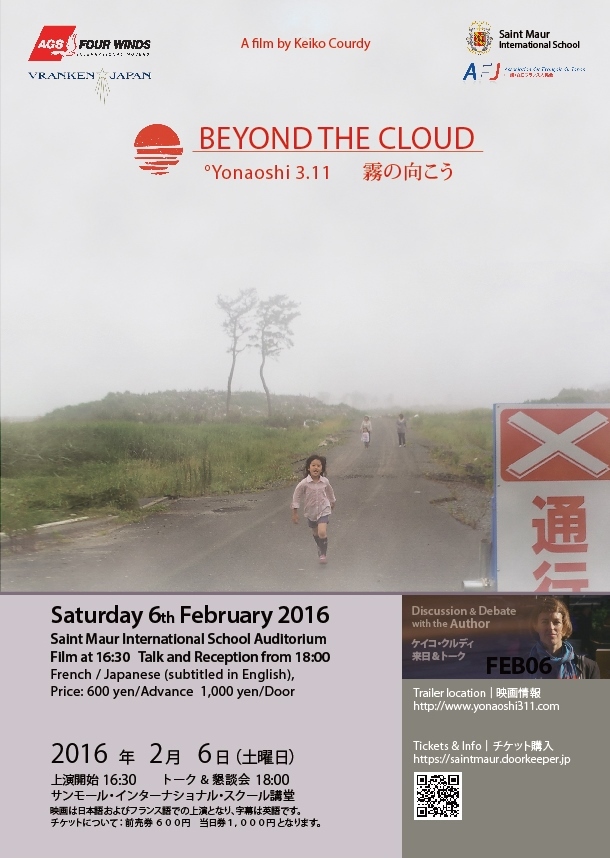 Get invited to future events

Book your childcare at : http://www.stmaur.ac.jp/_infrastructure/forms/index.aspx?action=ShowForm&FormId=14
Parking is available at the Rec Area for 500 yen per car, from 16:00 to 19:00.

An independent documentary film on Japan after Fukushima.
Fukushima is a parallel world. From the outside, everything seems normal. Some say that all is fine, all is under control. But today, nothing is resolved.
For more than a year and a half, Keiko Courdy met with inhabitants of the region, as well as famous Japanese public figures active since the disaster of March 11, 2011.
Synopsis :
Overwhelmed by the events of 11 March 2011, the French director Keiko Courdy left immediately for Japan. She spent more than a year and a half talking to people in Fukushima.
In order to try to understand, she also interviewed many public figures active in Japanese society since the triple disaster: artists, architects, writers, investigative journalists, no nuke activists, Naoto Kan the erstwhile prime minister at the time of the accident… Their compelling testimonies highlight the contradictions and movements in a society that is recovering from massive trauma.
We all have to learn from what is happening. Many people dream of a « Yonaoshi », a « renewal », but is it possible?
Can we change our behavior?
Book your childcare at http://www.stmaur.ac.jp/_infrastructure/forms/index.aspx?action=ShowForm&FormId=14